What does science predict our world will look like in 2050? How will people live? What objects will they use in their daily lives?

These are the questions, I tried to answer with my final bachelor's project. Following intense research I projected current trends identified by scientists into the future and translated them into objects for everyday use.

To stress the scientific foundation of the project, the objects were displayed in a minimalistic environment and accompanied by detailed legends.

Today, many of these may seem outlandish. In 36 years, they might be indispensable. 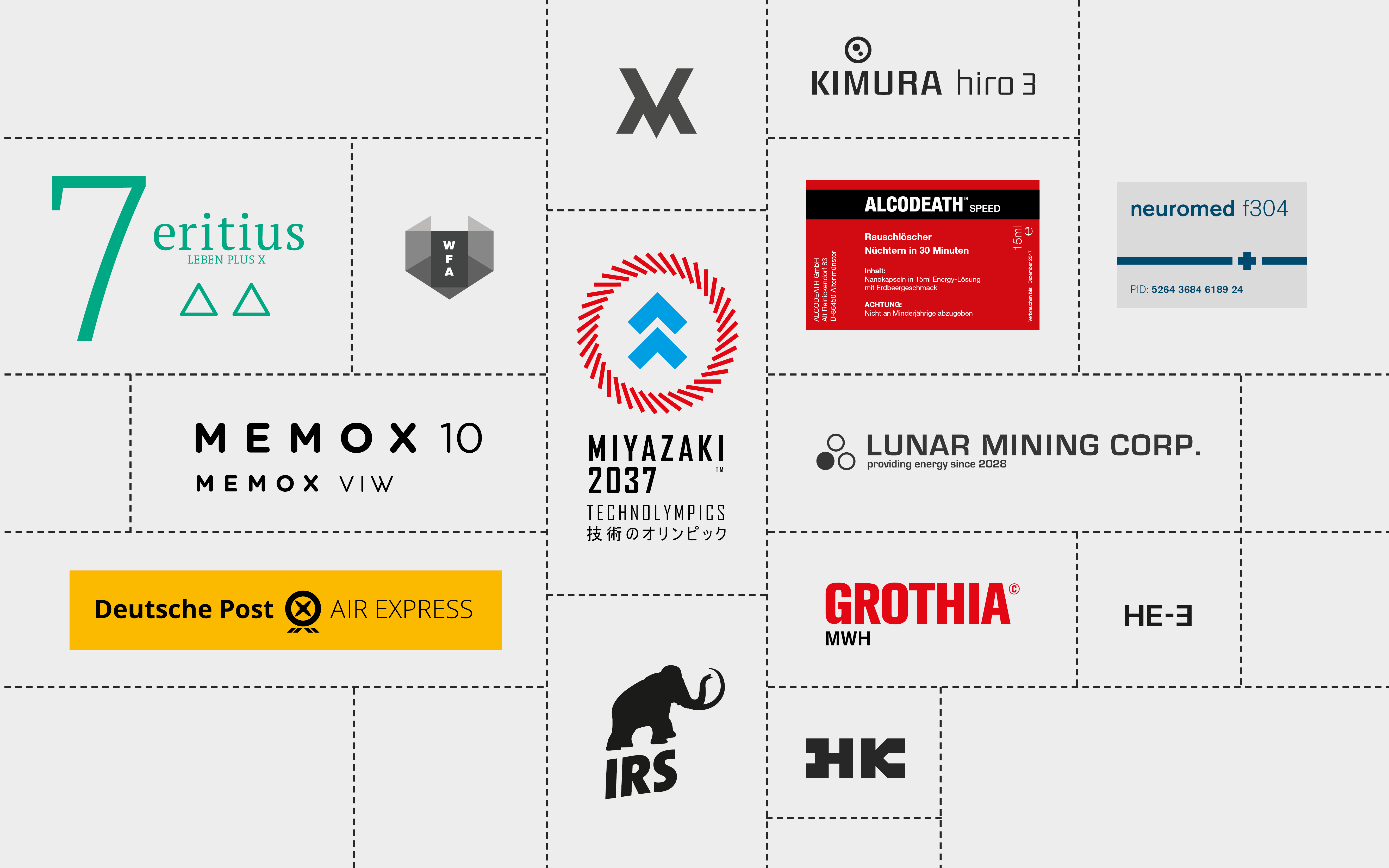 A small collection of the brands and brand elements I developed for 22 different souvenirs. 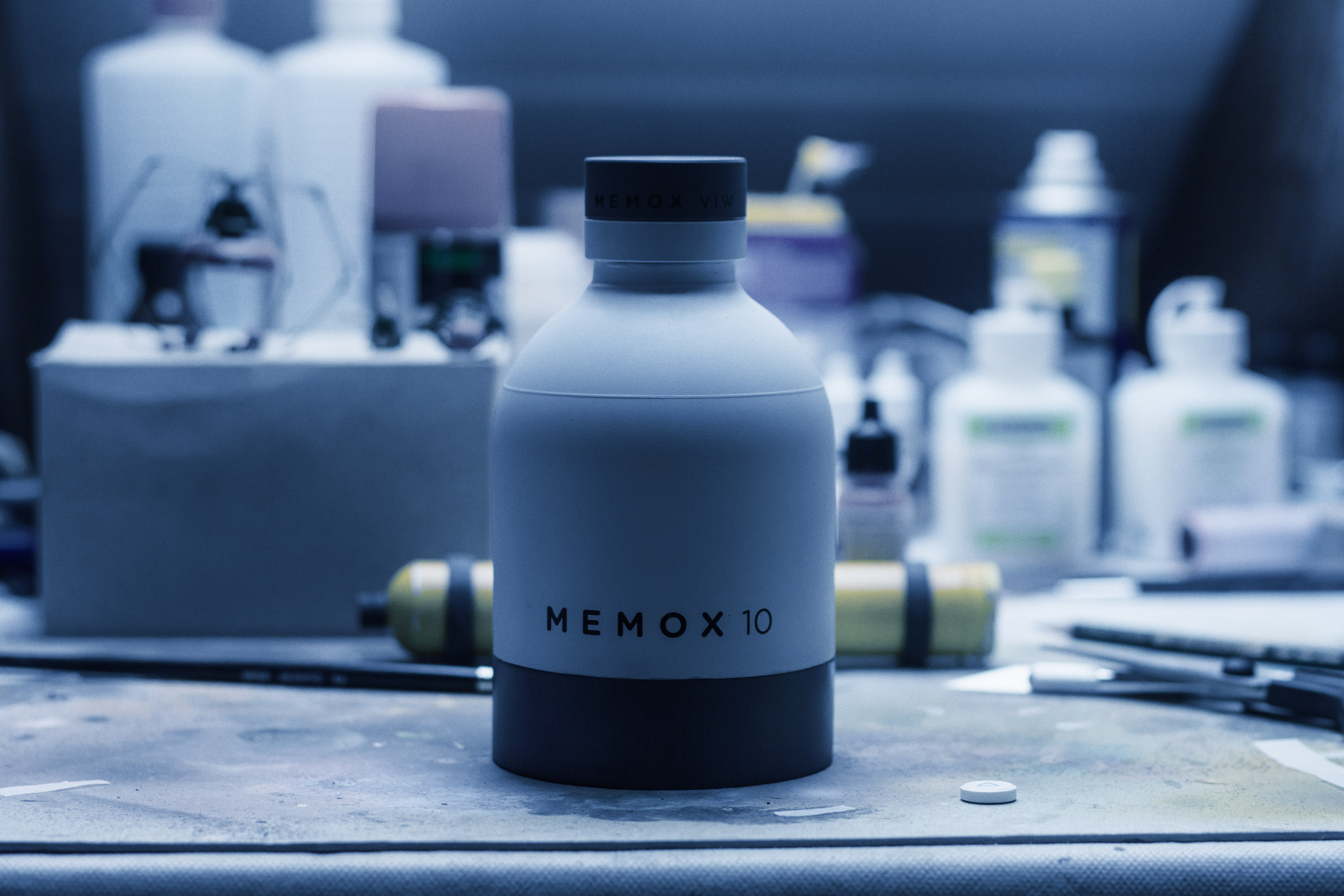 In 2050, practically everyone owns an inexpensive memory backup device, with which, as soon as you have entered your house, collected recordings are synchronized.
‍
Every moment can be saved. Every insult, every physical injury, every embarrassment. Every situation can be recalled infinitely often. "Forgive and forget" no longer exists because forgetting went extinct.

And the one who thinks death is the end, is wrong. Even after the ones who remember, are lying in their graves, the harddrives with all their memories rest still on their shelfes.

On the one hand, this may sound very frightening, on the other hand, also positive experiences can be projected back into the visual cortex at any time. The first kiss, the holidays in the Maldives. Everything can be experienced again at any time, at least visually and acoustically.

And the forgiving of a bad deed, now the deletion of the stored memory, becomes a much more conscious act. Memory loss is no longer a matter of time. People can decide for themselves, what they wants to erase and when. 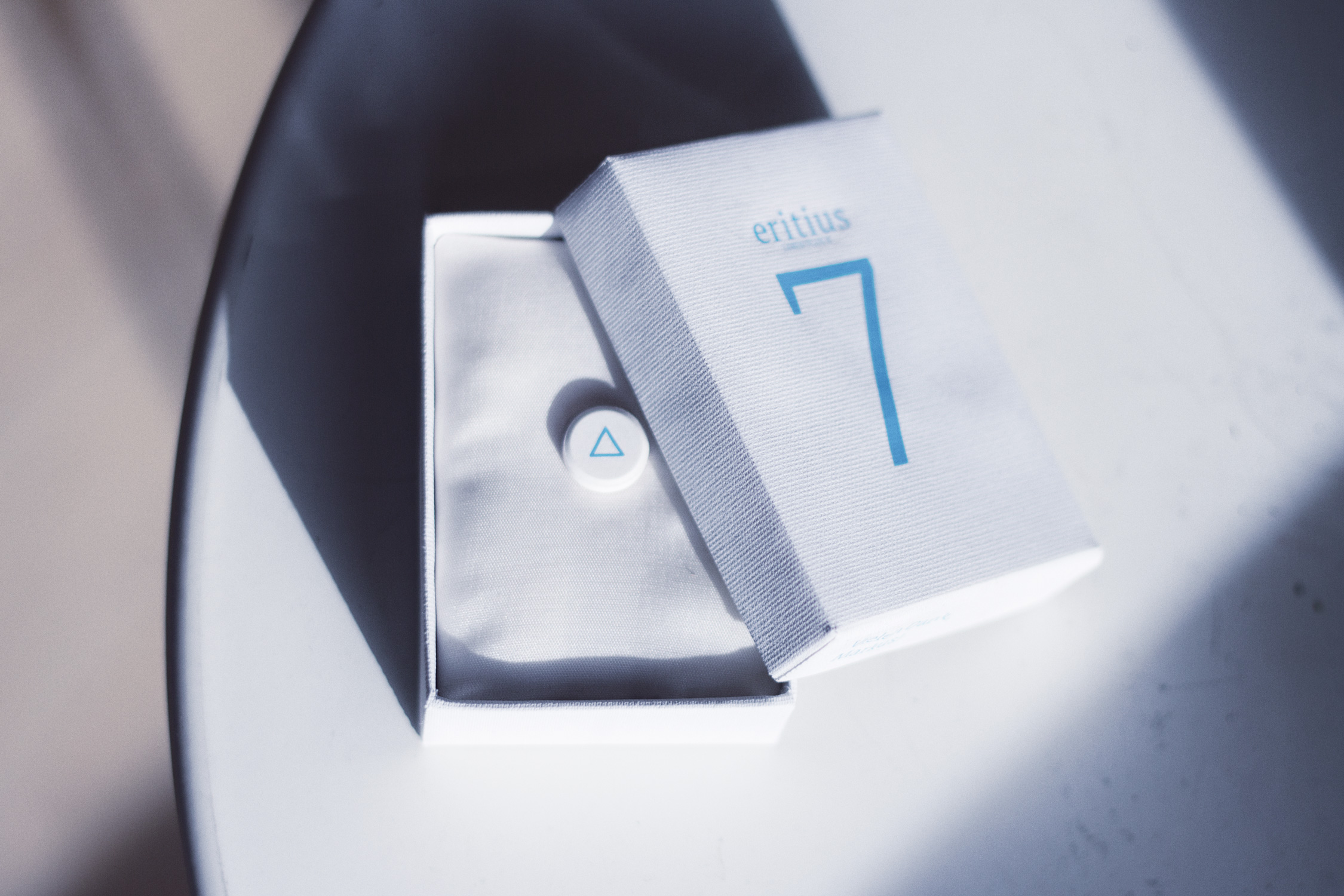 The seven-days pill is the manifestation of the end of a decades long business relationship between a person and the company "eritius". This company succeeded in linking the worlds of life sciences - the science of life extension - and insurance.

Eritius' business model is as simple as it is ingenious. Anyone who signs up from the age of 40 is guaranteed not to die a natural death. Every disease gets cured or alleviated, every sudden cardiac arrest is overcome and weak-aged bodies get "renovated".
‍
If the customers have enough money, they can extend the contract, which becomes significantly more expensive every five years. Upon end of this contract, the customer is discharged from the business relationship with a gift: The seven-day pill.

With this present, eritius gives its customers the possibility of a dignified and painless farewell from family and life. Exactly on the seventh day after ingestion, the exhausted person falls asleep peacefully forever.

Of course, it is also possible not to take the pill and let nature do it's work. In this case, however, a very unpleasant and painful death is likely. 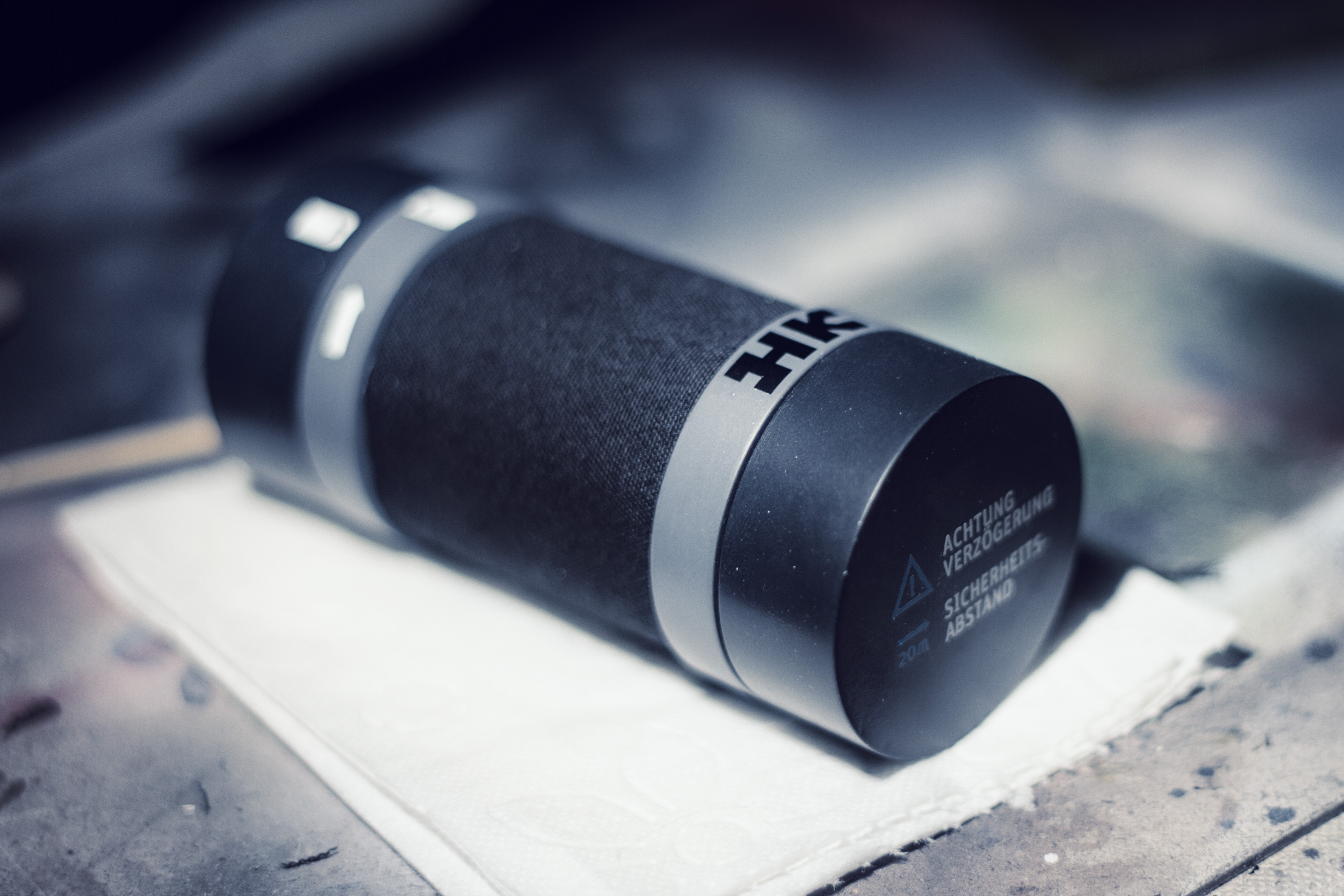 In the future the gap between the poorest and the richest will increase even more. If unrest breaks out at some point, the police will take action. New types of non lethal weapons are in their arsenal, which generate high-frequency, non-thermal, electric fields, temporarily disrupting the locomotor system, causing sensory and coordination disorders.

In short: All those within range of the electric field would immediately fall over motionless and no longer notice what is going on around them. Misuse and collateral damages are very likely. 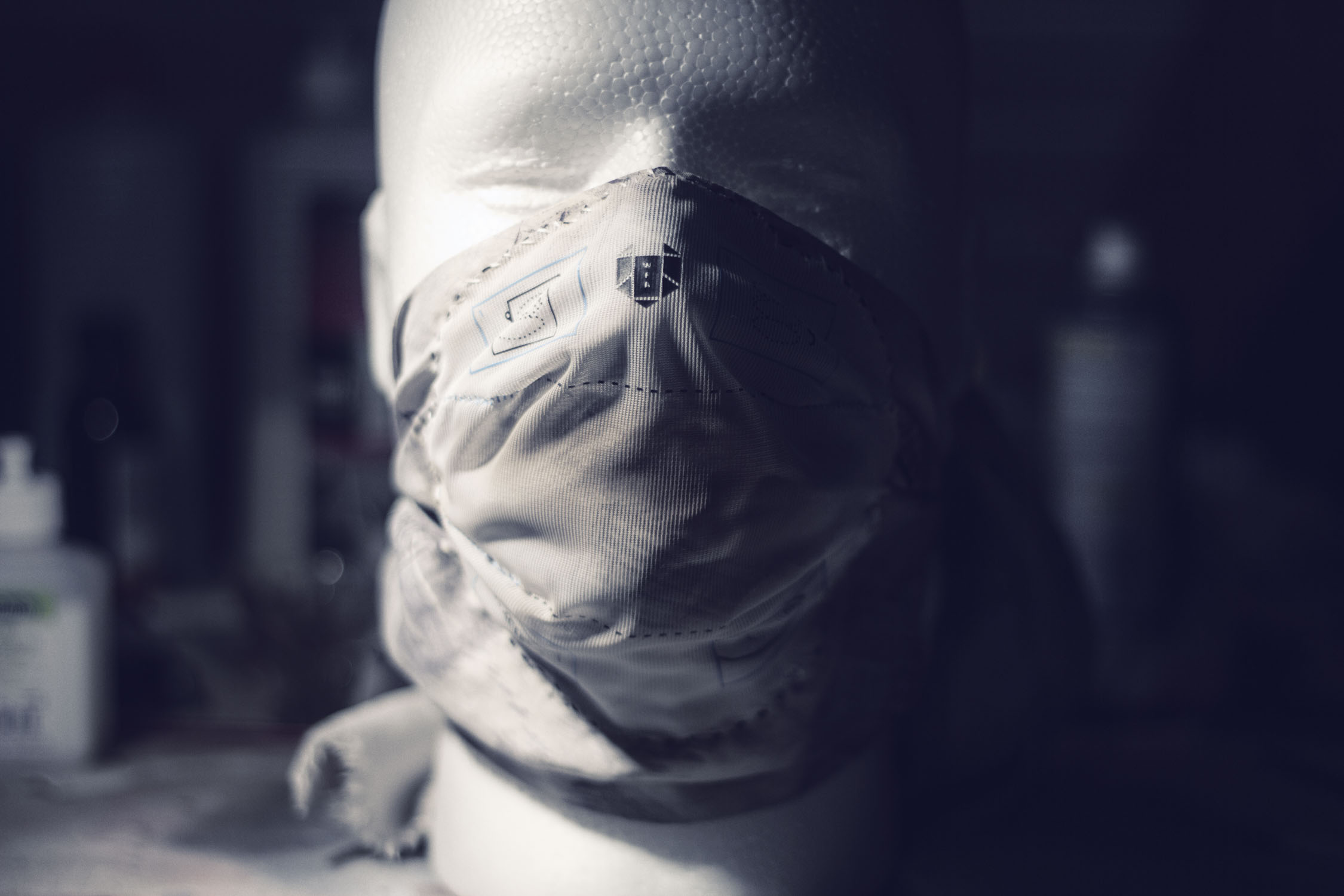 As by now, more than 800,000 people die every year in developing and emerging countries as a result of breathing polluted air. This problem will increase. Like China, the other emerging countries will build an enormous number of new coal-fired power plants in the coming years. That will produce a whole other level of smog problems in the bigger cities.

As part of development aid, inexpensive but very effective filter materials could be provided, that can be sewn into existing garments for respiratory protection (such as scarves and bandanas).

As shown above, the instructions, how to fold and apply the fabric, are printed on the material to make them easy to use. 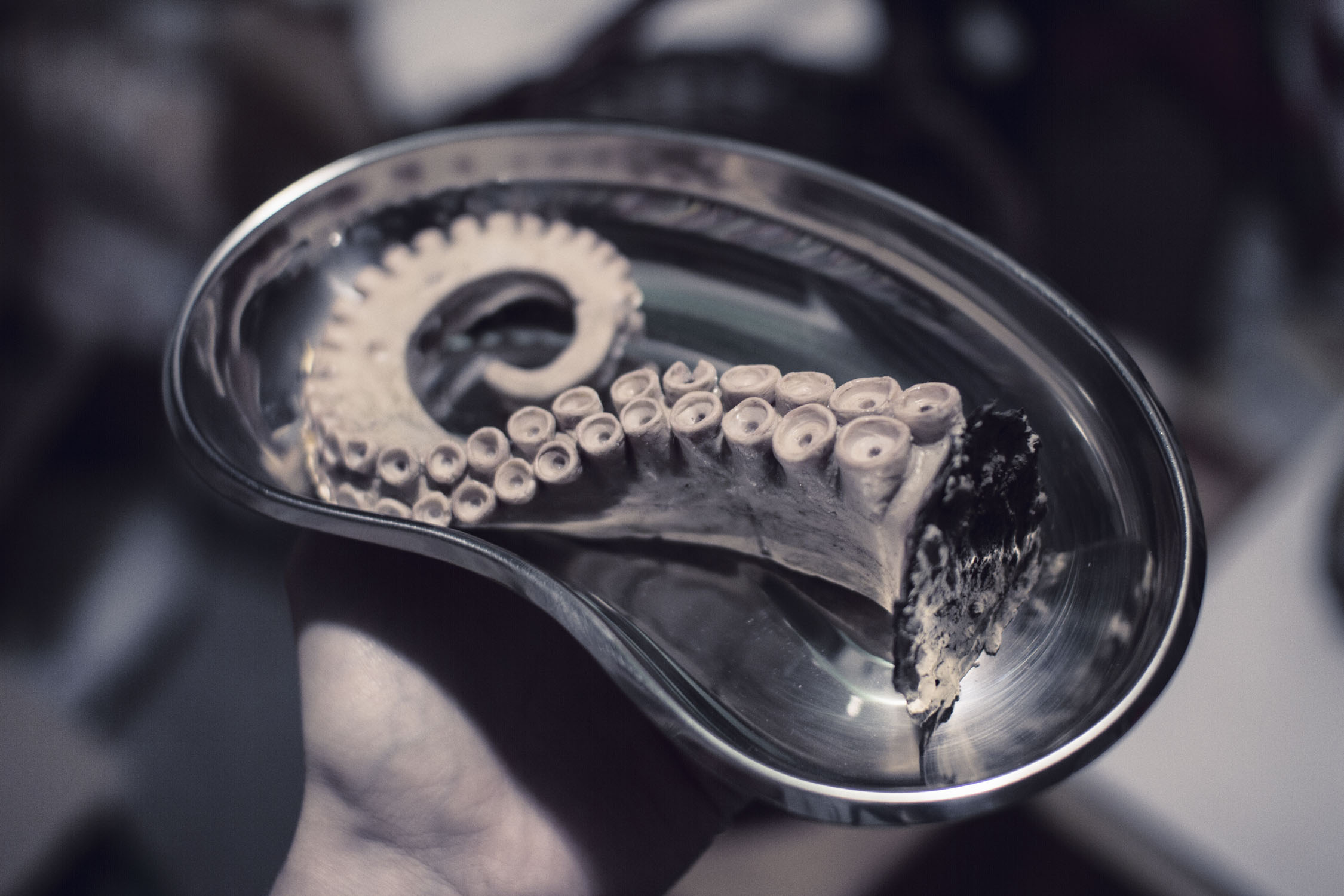 Individualism as well as the willingness to optimize and beautify one's own body will continue to increase until 2050 and it will be possible to grow organs or limbs from own DNA. In September 2013, scientists in China let the nose of an accident victim regrow on his forehead, and then transplanted it back to the right place.
‍
The technology resulting from such medical achievements can certainly be adopted by pop culture in the future.

Like that, it would be perfectly possible, to grow an oversized rat tail, or to have an octopus tentacle (like the one shown above), assembled from one's own DNA, transplanted to the back of one's head. 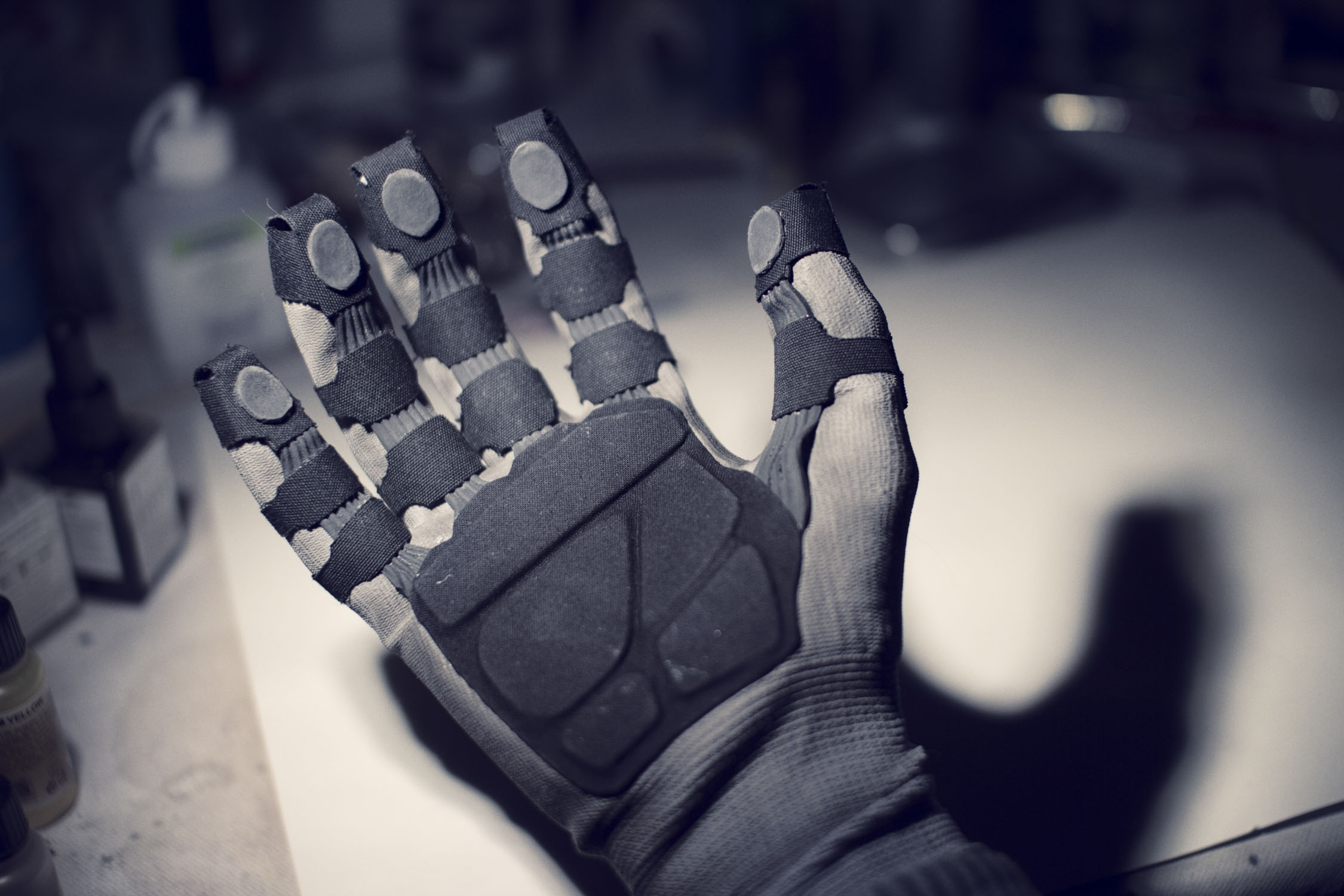 At the end of 2012, nanomachines imitating the movement of a human muscle were created for the first time.
‍
Apart from military applications, such technology can be used in the areas of physical work, prostheses or athletics. Even older people can stay mobile for longer, with clothing that has been equipped with supporting muscles.

The item shown above, is a glove, that supports the grip strength of the hand muscles. It uses sensors on the back of the hand to detect, when tendons and muscles are moved and tenses the corresponding synthetic muscles on the front of the glove. This pulls the fingers down and strengthens the handle.

It can be powered by a small rechargeable battery, or as part of an entire muscle suit from an external energy source. 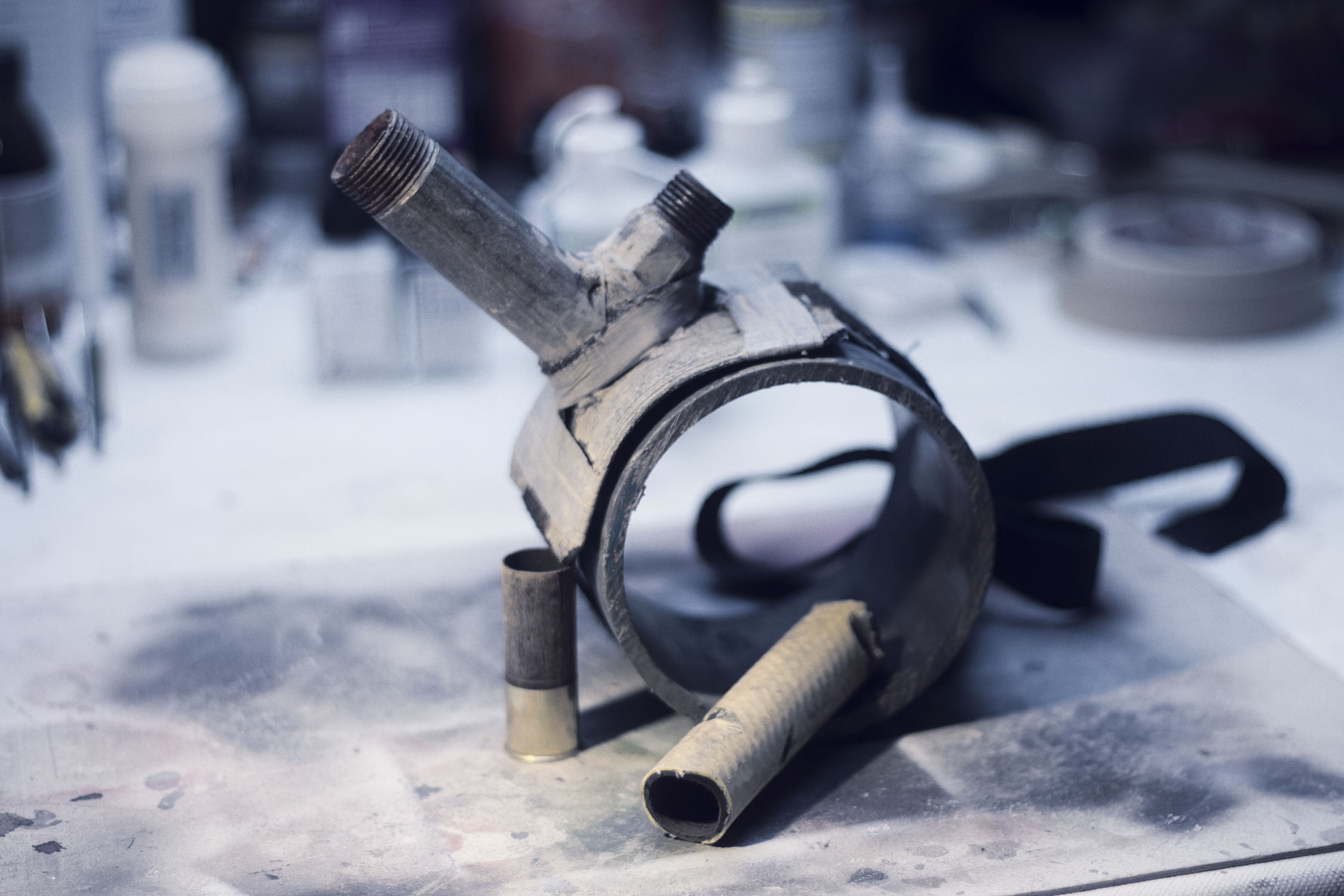 Abuse in agriculture and the fact that most nations simply ignored the consequences of their environmental actions will lead to a drastic shortage of drinking water in poorer countries by 2050. Only the wealthy will be able to afford access to an endless stream from the tap.

Some, however, do not want to accept the restrictions imposed by this new development. So they are illegally tapping water pipes.

With the equipment shown above, they can quickly access the water and reroute a vast ammount with as little loss as possible. That's important, because the water thieves won't have much time to fill up and disappear before the loss in pipe pressure is detected. 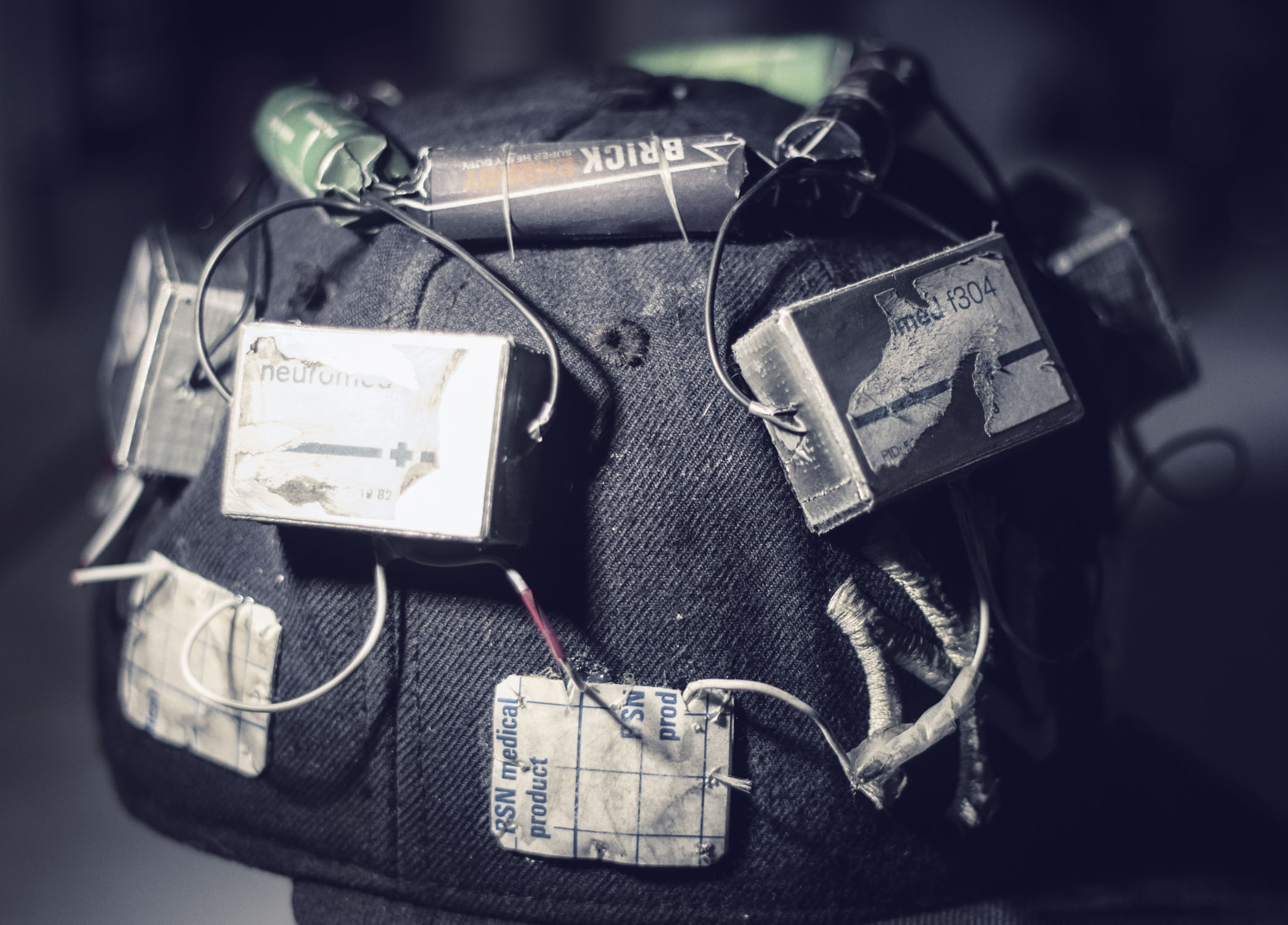 Since 1985 it has been possible to directly influence the brain without surgical intervention using methods such as transcranial magnetic stimulation.
Especially triggering the brain's acoustic, optical or sensory systems will soon see enormous progress.

Such technology would be predestined for abuse as a drug substitute. Especially the stimulation of the hypothalamus would have serious effects. In this area, very centrally located in the brain, the body's own opiates and some other hormones are produced. And artificial increase of those substances would have a similar effect to taking methamphetamines or cocaine.

Devices for this could be built by literally everyone with a little crafting skill and understanding of basic computing. The result could be something like the cap shown above.
‍
What sounds like a junkie's dream, can quickly turn into a nightmare. Permanent hypothalamus hyperstimulation can lead to cardiac arrhythmia, complete loss of reality, mental disabilities and gland bleeding.
But the sheer possibility and simple access to the technology, would make high-risk drug deliveries and the cultivation of drugs a thing of the past. All you need are some components and a crafting tutorial. 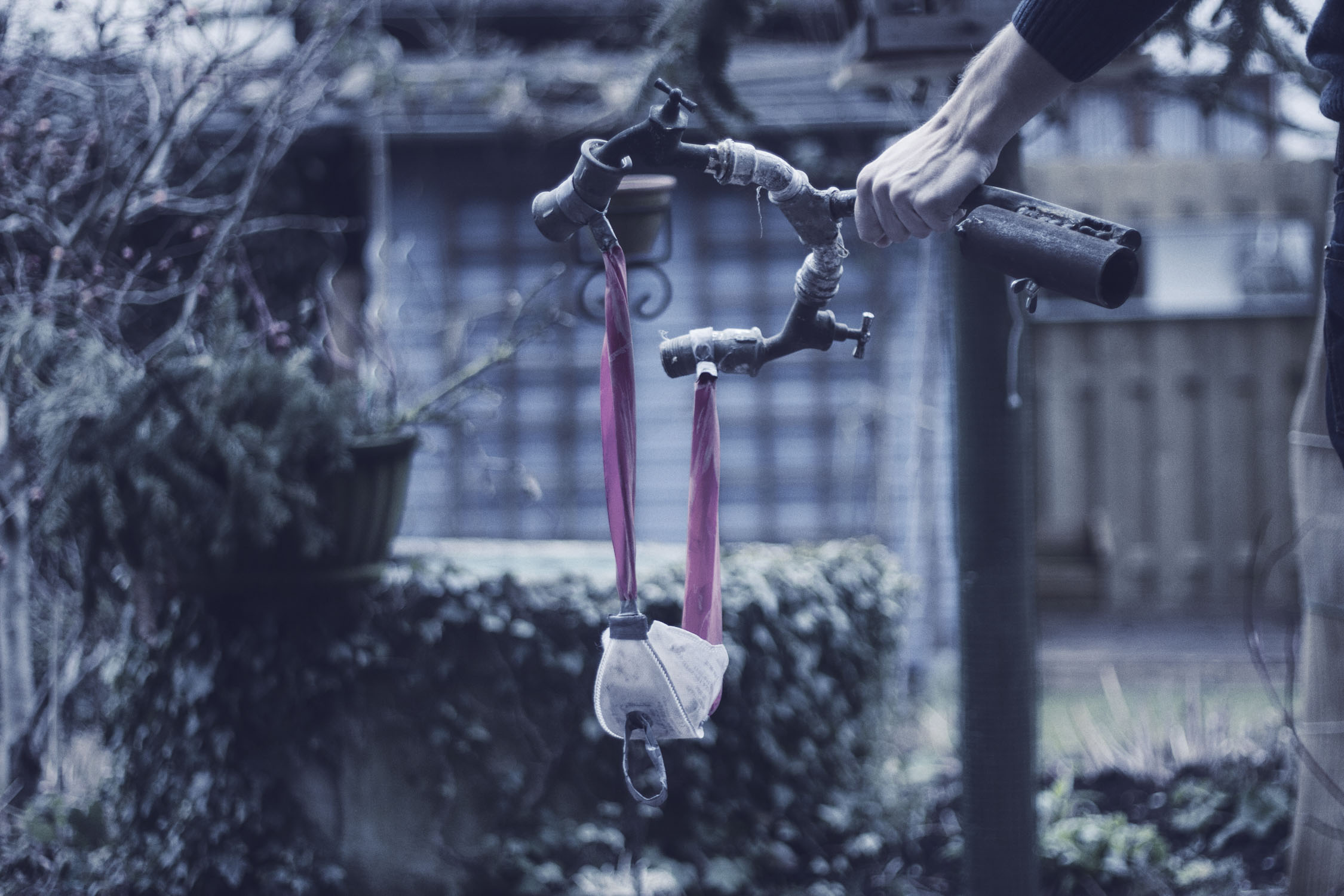 A more conceptually speculative item is the drone slingshot. In 2050 most people without higher education or special training have no chance of getting any kind of work legally.

A viable source of illegal income, however, could be the drone harvest: Shooting down unmanned delivery drones flying over the slums.

For this purpose, large slings of iron are roughly welded together, which can be screwed onto many types of piles. Thus fixed, the shooter can hang himself with his whole weight in the rubber ropes and carry the projectile to considerable heights, bringing down the drone, harvesting the cargo and the valuable machine itself. 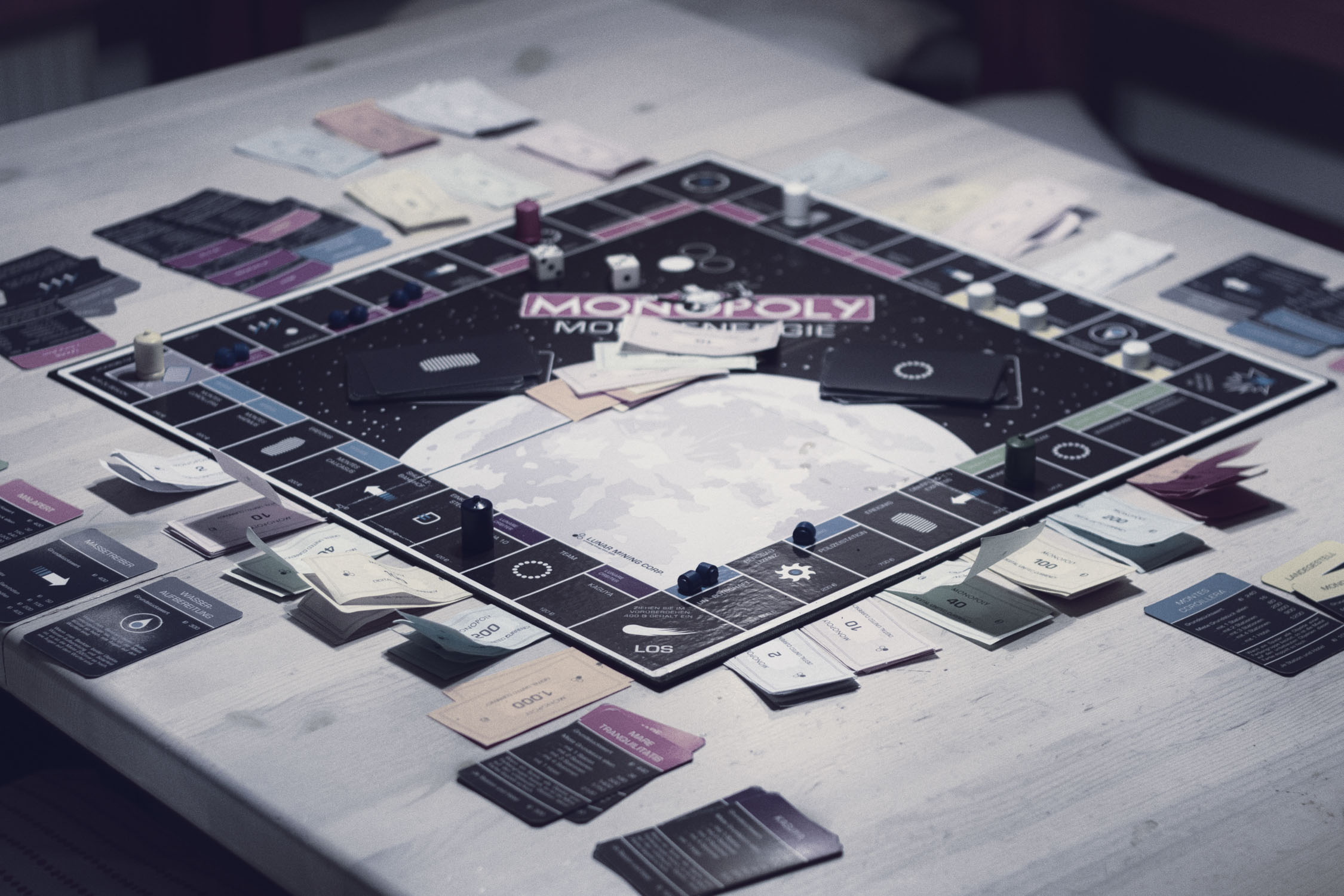 Helium-3 is likely to be necessary for the successful realization of nuclear fusion. So there will be sudden interest in colonizing the moon.

This element occurs in considerable quantities only on the moon, where He-3 deposits have already been detected on its surface.

From these colonies, the surface of the moon is ploughed over extensively in order to detach the helium-3 from the upper rock layers and the boulder, the so-called regolith. Once this is done, it is filled into stable canisters, loaded into landing capsules and shot back to earth with the help of a mass driver. In addition to the industrial part of the lunar operations, also touristic endeavors develop. In a moon hotel wealthy tourists could experience a relatively uncomfortable, but unique adventure vacation.

In 2026, Lunar Mining Corp. has begun to build its first moon colony. In order to attract further investors and also to arouse interest in the lunar tourism offered in the future, the marketing department of the company has decided to have a special edition of the popular board game classic Monopoly produced. 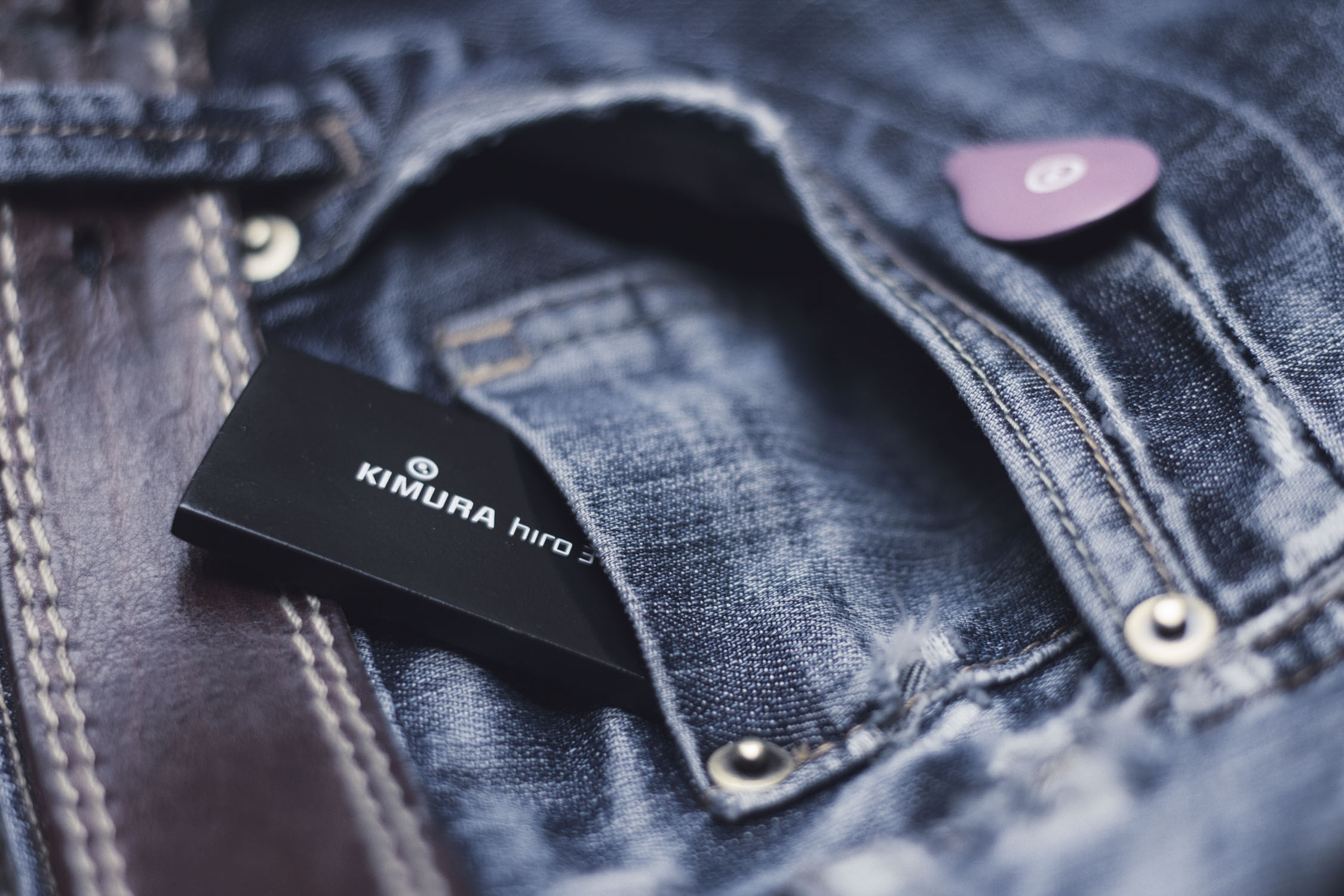 The technology, which shows one of its worst sides in the Neuro Intoxication Cap, will also be used much more professionally, in everyday communication and entertainment electronics.

Today we still have to look at a display to get information. In the future the visual center in the brain is stimulated by the interface patch and augmented reality is placed directly over the visual impression of our environment.

The same will be possible with hearing. Completely silent to bystanders, music can be played in the brain in the best sound quality.

In the image above you can see the computing device (in black) and interface plaster (in rosé). 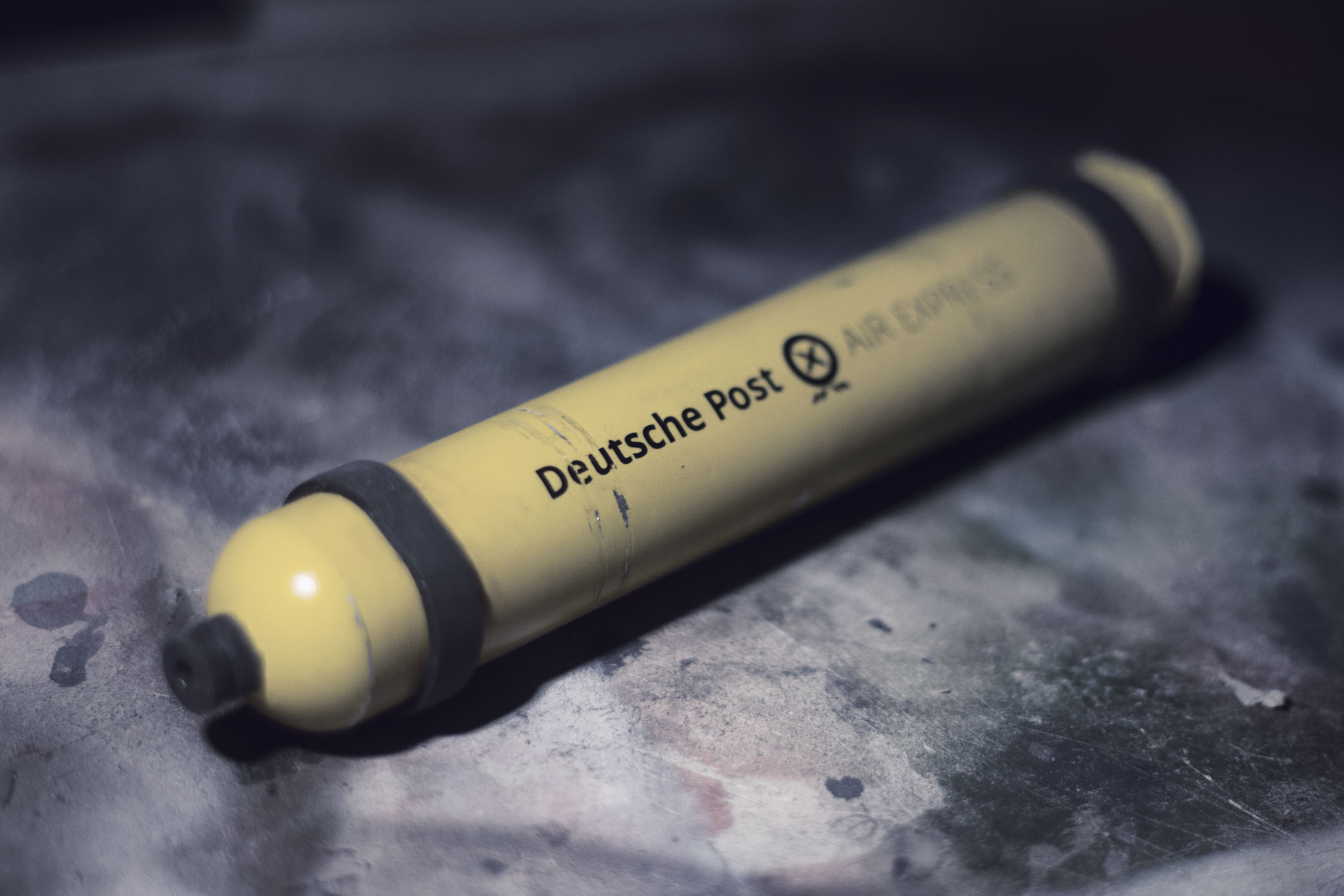 It is very likely, for physical correspondance by letter to have decreased to a minimum by 2050. However, important, binding documents such as contracts will likely continue to be sent by post.

There will also always be nostalgics who prefer a handwritten letter to the digital equivalent. However, most people will probably no longer have a mailbox on their doors because all postmen have been replaced by small delivery drones.

For those, a hole could be installed at a higher point of the house, or in the case of a city apartment, on an outer wall. The sender fills a designated cylinder with a rolled letter. This cylinder is then inserted into the mail magazine of a delivery drone and the drone flies from target to target. It docks onto the recipient's mail door and shoots the letter out of the cylinder into the apartment using compressed air. Then it flies on to the next destination. The entire delivery process only takes a few seconds. The drone hardly has to stop. 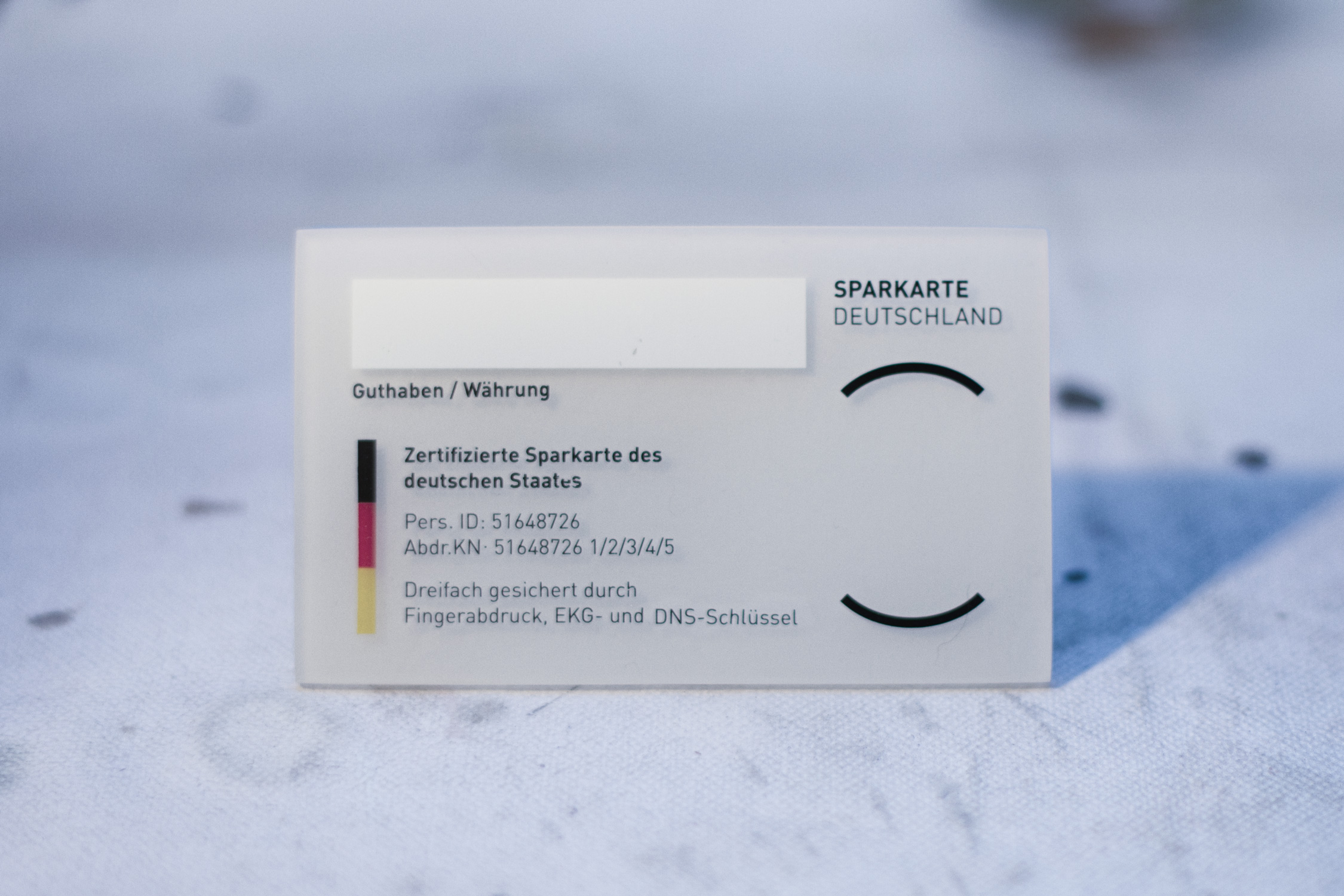 Virtual currencies, which are completely detached from the control and regulation of banks and other large financial institutions are on the rise. Bitcoin is leading the way and many are following. It is very likely that physical money, i.e. notes and coins, will die out or at least become very unusual in the long term.

What many might miss, however, is to hold money in their hands. What you can see and feel always seems safer than anything digital. There would be great fear of losing all savings in the event of a virtual currency system failure.

Here the state could step in and introduce certified savings cards on which virtual money can be temporarily stored -independent of the Internet and computers.

Triple secured by the individual electrical charge of the skin, a DNA scanner and a fingerprint reader one secures the savings on these cards.